The pitch is rectangular, 18 metres long and 9 metres wide, as in volleyball. It is divided into two sides with the net in the middle. One team consists of 4 players: 3 of them play in the rear part of their side of the pitch. Their task is to throw the ball through one of the three rings (wholes) in the net (one in the middle has 70 cm in diameter and two side ones 50 cm each), making their opponent fail to catch the ball. The fourth player is a playmaker: he or she plays back to the net in the front part of the pitch, marked by the line 1,5 metres from the net. His or her task is only to pass the ball to the other players of his or her team. He or she is not allowed either to throw the ball through the wholes in the net or to block the wholes.

The game starts with a serve – you need to hit the ball over the net like in volleyball. But then the members of the opposite team, standing on the other side of the net, have to catch the ball and then either pass it to the other players of their team (up to three passes) or to throw it through the wholes in the net. The points are earned when your opponent does not catch the ball. The points are lost if you hit the ball at the net, under or over the net or you hit it outside the pitch. The game is usually played in sets (best of three) and up to 15 points each set.

In the thirties of the 20th century gymnastics and PE teacher Włodzimierz Robakowski had been observing fishermen playing by throwing buoys through broken nets at the lakes of Polish region Masuria. Based on these observations, he invented a game and described it in his book published in 1935. After the II World War it was forgotten but then reinvented in the 21st century by prof. Wojciech Lipoński from Poznań and then further developed by prof. Małgorzata and Michał Bronikowscy in Poznań. Now it is a part of some courses at the University School of Physical Education in Poznań.

Ringnet ball consists in throwing the ball through one of the three rings (wholes) in the net trying to make the opposite team not to catch the ball before it touches the ground at their half of the pitch.

Ringnet ball is played on a volleyball pitch or anywhere you can draw a pitch. You need a special kind of net with three wholes (produced in Poland by a sport and tourism equipment wholesales) and a volley ball.

Ringnet ball is played from time to time during festivals and religious feasts, e. g. Mayday, Children Day, Saint John Day, summer festivals in cities etc. But it has no deep connection with religion or feast. These events are just an opportunity to present, promote and play the game for instance by students and doctoral candidates from the University School of Physical Education in Poznań at many events, during some festivals like Festival “Integrations” in Poznań with many folkloristic groups from around the world, in Sieraków during summer sport camps for children and youths and so on. This sport was also presented abroad, among others, during the World Sport for All Games in Pusan (South Korea, 2008) and Siauliai (Lithuania, 2012) and now it is included in the curriculum of one of the universities in South Korea and in a park of traditional games in Canada.

In the Wielkopolska Ethnographic Park (the branch of the Museum of the First Piasts at Lednica) in Poland, ringnet ball is played occasionally during some events, like Children Day, Mayday etc. In 2018 a special event dedicated to traditional sports and games will be organized during which Ringnet ball will probably be played. Bartosz Prabucki, PhD, will be its main organizer. 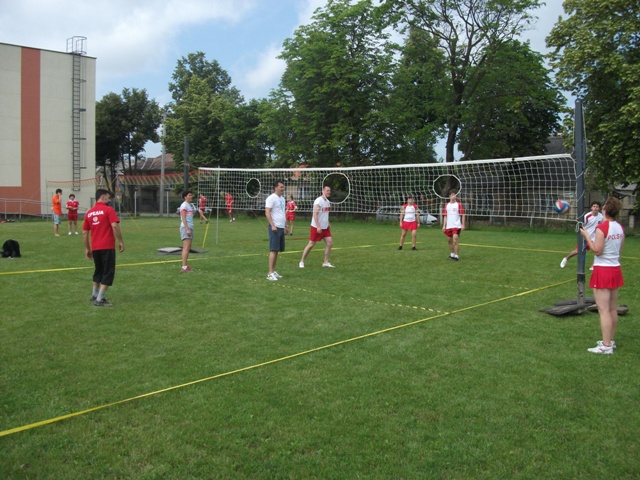