A throw has got two parts: TIRAR (to throw) and BIRLAR (to throw back)
TIRAR (to throw). In the first part, «tirar», the player throws the balls from one of the throwing points marked in the throwing area. At the beginning of every game, one of the players/teams fixes the throwing point (distance) and the other one marks the line, puts the «emboque» (on the right or on the left of the skittles) and says its value (from 10 to 40). Each player will throw three balls (if they are playing individually or in pairs) or two (playing in teams). These are some of the most important rules:
1.- The player has to give the ball a spin to the left or to the right according to the position of the small skittle called emboque. If the emboque is on the left you have to give the spin on the left. This is called to play «a la mano» (to the hand). When the emboque is situated on the right you have to give the spin on the right and this is called to play «al pulgar» (to the thumb finger).
2.- The ball has to go through the air and fall on the ground further than a line called «fleje» that is situated 1.25 m before the first skittle.
3.- You are not allowed to knock down the first skittle on the side lines or pass the balls outside the skittles.
4.- After passing the skittles, knocking down some of them or not, the balls have to reach the line marked on the ground between the skittles or further. The emboque is situated on some point of this line (on the right or on the left side of the skittles.)
5.- The «emboque». There’s a special piece of play consisting in knocking down the first skittle in the middle line and the emboque or passing the ball behind it. This piece of play, called emboque (the same name as the small skittle) is very difficult because the ball has to change its direction very much after knocking the first skittle. Its value can be from 10 until 40.
If a ball breaks one or more of these rules is not valid and it doesn’t count any skittles. Moreover you can’t throw it in the second part of the game.
BIRLAR (to throw back). The second part, that is called «birlar», consists in throwing the balls back from the place where each one stopped after the first part (tirar). There isn’t emboque in this part, so you can give the ball the spin you like. There aren’t any special rules now.
In both parts of the game every skittle counts as ONE except the one in the middle which counts as TWO but only if it is knocked down alone.

There are many different skittles games in Spain and in Europe, probably all of them arisen as different forms of evolution from an only original game, but nobody knows which one is the real origin of this first game of skittles. Some theories go back to the Prehistory, explaining it by the need of prehistoric humans of training their aim for hunting. In historical ages references exist in Egypt, Greece, Rome â€¦ It’s probable that one of this kind of games came to Spain from the Centre of Europe through the Camino de Santiago. In Cantabria (and in the eastern area of Asturias as well) this modality has been playing since ancient times as an activity of leisure, especially in the country areas. Long time ago the bowling alleys were near the churches but after that they were located next to the bars, even they belonged to the bar owner. During the games the players used to drink some wine or beer and at the end the losers had to pay for those drinksâ€¦ and leave the bowling alley since other team of players had asked for their turn to face to the winners. Afterwards, along the second half of the 20th century, the game suffered a process of change, getting to the sportive activity with lots of competitions: leagues, championships, tournamentsâ€¦ at the same time that the game as activity of leisure has gone in recession.

This is a bowling game consisting in knocking down with some balls as many skittles as you can. It can be played individually, in pairs or in teams (normally of four players).The winner is the player/pair/team who knocks down more skittles than their opponent.

Skittles and balls are the materials used. The skittles (nine and another smaller one called emboque) are made of wood (from birch or hazel tree) turned in a specific shape. The balls are made of wood too (from holm oak). They are completely spherical and its weight is between 1.5 and 2.3 kg 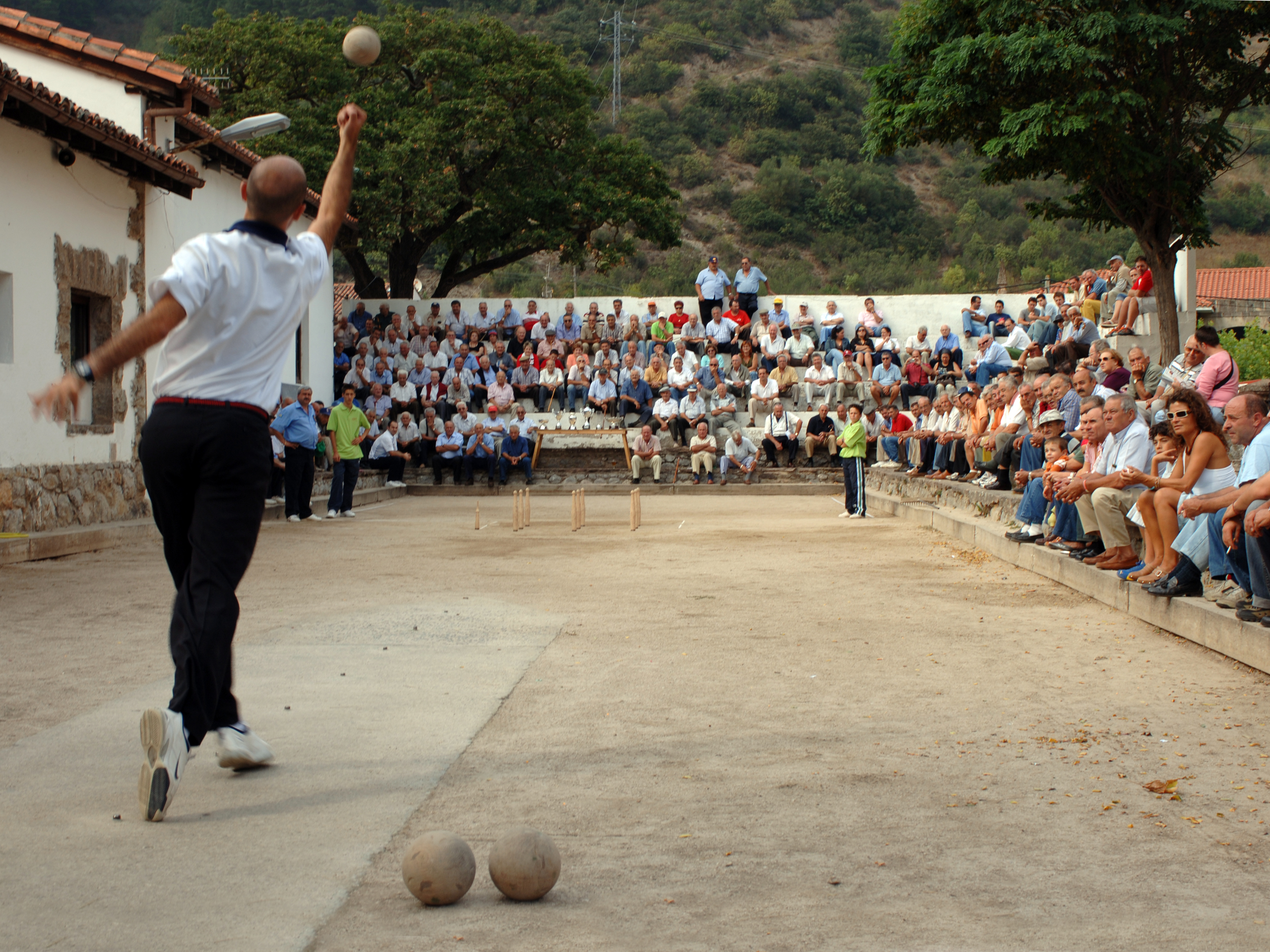