The children are separated into two teams. To begin the game the children draw lots or a children’s rhyme like “Eeny, meeny, miny, moe» is used to see which team goes first.The first team takes the tiles and starts piling them up, namely one on top of the other, so as to form a tower. The second team watches at a distance of 5-6 meters from the tower. Then taking turns, one at a time, the members of the second team throw a ball to try to knock down the tower. Each person gets a turn, one throw only. If someone from the second team knocks down the tile tower with his/her ball, then the first team tries build a tower (setting up one tile over the other), while the second team tries to knock it down. If the first team succeeds in piling up the tiles, creating a tower, before the players are out of the game, then it wins the first set. If the team does not succeed, then the game begins again with the teams reversing their roles. The winner is the team with the greatest number of sets. Watch the game KERAMIDAKIS on you tube: https://youtu.be/P-2V1lKJy5o

The game Keramidakia (tiles, little tiles or pieces of tile) was played throughout Greece.

NATIONAL AND KAPODISTRIAN UNIVERSITY OF ATHENS

The team that first succeeds in piling up the tiles into a tower wins the game. 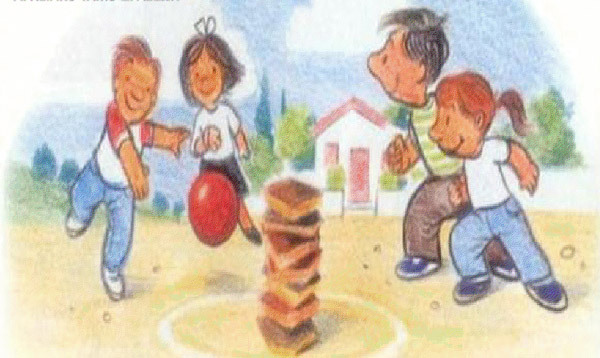