The matches last fifty minutes. They are played in a rectangular field covered in sand. A white line divides the field into two identical squares and on both sides of the bottom a net is mounted on the fence surrounding the entire perimeter of the game. Two teams composed of twenty-seven players per side compete in this field.

The twenty-seven players are divided into the following roles: 4 Datori Back (goalkeepers), 3 Datori Innanzi (defenders), 5 Sconciatori (media), 15 Innanzi or Corridori (attackers). In the center of the inferior network the corner of the Captain is mounted who has the task of intervening in the fights to pacify the spirits of his own players.

The match is led by the Referee, assisted by six Segnalinee and the Commissioner who places outside the field. The Field Master monitors the game’s usual behavior and intervenes to restore order and maintain discipline in the event of a fight in the field.

The game starts with the ball thrown by Pallaio in the center line and the next «shot» of the colubrine gives opening of the fight. From this moment, the calcianti (players) of the two teams will try (by any means) to take the ball to the bottom of the opponent’s field and deposit it in the bottom of the net scoring the «caccia» (goal).

It is important to throw with great precision because if the ball ends, following an incorrect throw or a deflection of the defenders, over the net, the score of half a point in favor of the opponent would be assigned. In each goal, teams must change field. The winner will be the team that has scored the most goals at the end of the 50 minutes of play.

The prize is also of particular interest: In addition to the prize, while the anthem of victory sounds, the Country Master will deliver a calf of the Chianina race to the winning team of the tournament.

XIV century
The regulation of a game, as old as Florentine football, has undergone considerable changes over the centuries; In our days, we play with very specific rules that refer to the fourteenth century.

Score a hunt (goal) by depositing the ball in the opposing team’s net.

A ball.
A field of sand or meadow

Specifically, it is practiced in four of Florence’s favorite playgrounds: Piazza Santo Spirito, Piazza Santa Maria, the «Prato» (in the large space in the port of the same name) and Piazza Santa Croce which was considered the most prestigious field, where the games of great importance took place and where the Four Neighborhoods Tournament is still played. 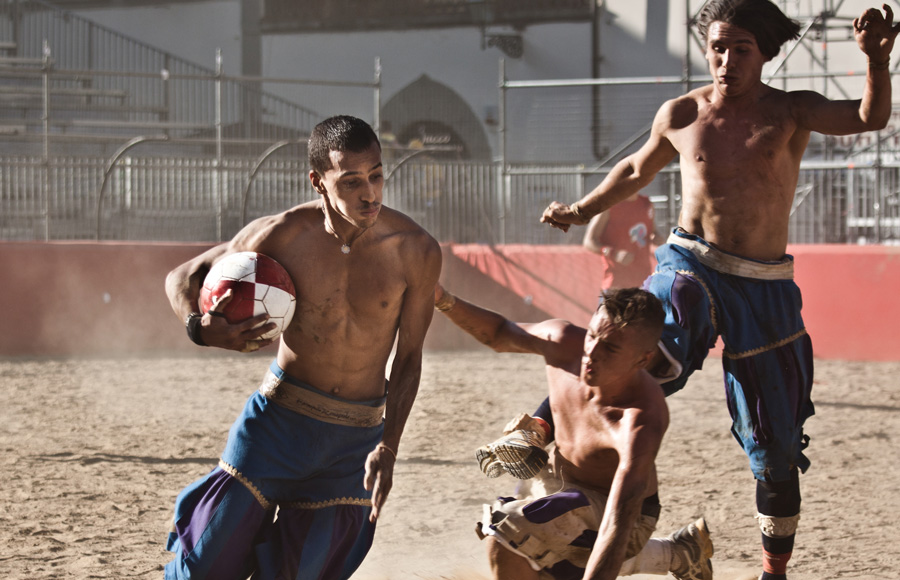